As part of a $25,000 deal made in June, Wohl and his lobbyist colleague Jack Burkman also allegedly pushed to get New York US Attorney Geoffrey Berman, who had led Epstein’s case, fired in order to stall or stop the criminal investigation into Maxwell.

One of the women they tried to use for their smear plots, Maryland model and paralegal Kristin Spealman, told DailyMail.com the men had been hired by Maxwell, who currently faces trial over charges she and Epstein trafficked underage girls for sex.

Spealman, 36, said the lobbyists bragged to her they had been hired in early June for $25,000 to dig up dirt on Maxwell’s alleged sex trafficking victims and to get Berman fired using Burkman’s supposed influence with Attorney General William Barr.

Berman ultimately stepped down after a push from Barr. But less than two weeks later, Maxwell was charged on July 2 as being part of Epstein’s sex trafficking ring and taken into custody. 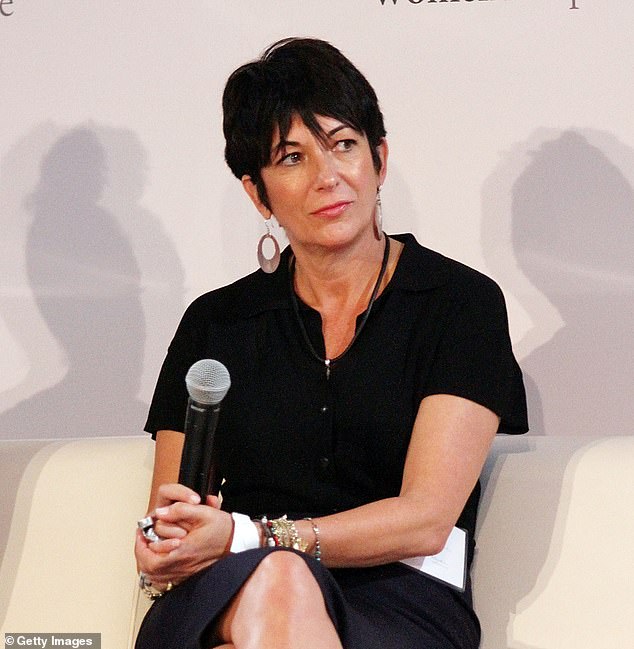 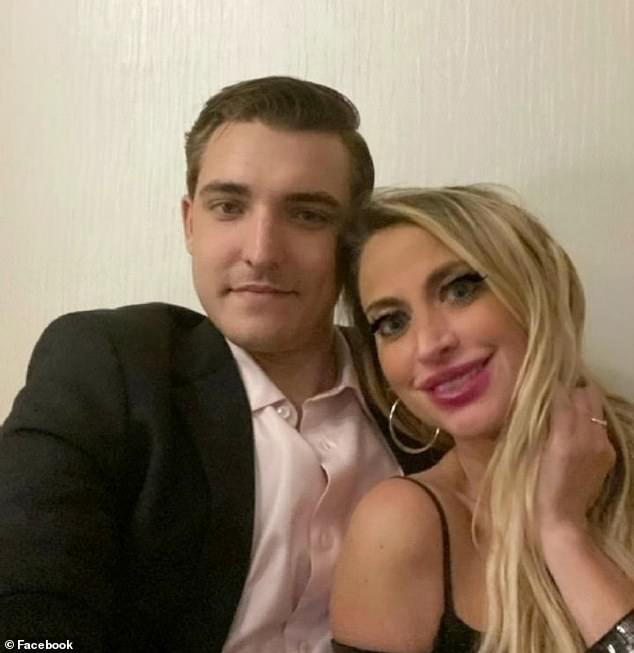 ‘Every person, even those accused of the most odious of crimes, deserves representation and possesses the right to engage lobbyists to petition the government on their behalf,’ the 22-year-old said. ‘Otherwise, we cannot comment on client matters.’

Burkman similarly told DailyMail.com: ‘All persons accused of crimes–however terrible–have the right to representation and representation in the court of public opinion.’

Federal documents filed this month show a company linked to Maxwell had hired Wohl and Burkman to lobby on ‘issues relating to US DOJ, Senate Judiciary, House Judiciary,’ DailyMail.com can exclusively reveal.

A form filed with the US Senate by Burkman’s company, J M Burkman & Associates, on July 3 under the Lobbying Disclosure Act shows Wohl and Burkman were hired by Granite Realty LLC.

The form lists Burkman and Wohl as lobbyists for Granite Realty, described as a ‘real estate company’, and indicates the pair will be lobbying over ‘Issues relating to US DOJ, Senate Judiciary, House Judiciary.’

New York prosecutors say the firm is connected to Maxwell, with the LLC linked to her purchase of a New Hampshire house where she was arrested on July 2 – the day before Burkman’s lobbying disclosure was filed.

Maxwell used a fake name and the ‘carefully anonymized LLC’, set up just weeks before the purchase, to buy the house while she hid from law enforcement, prosecutors in her New York sex trafficking case said.

Wohl and Burkman told Spealman that Maxwell also used the secretive LLC to hire them as lobbyists around early June, the model claimed.

‘Her company Granite Realty LLC hired them to first get rid of the US attorney Jeffrey Berman,’ the paralegal said.

‘She wanted him fired. And then I guess she assumed the charges would go away or maybe she wouldn’t be prosecuted. I think that was the goal.’+15+15+15Drone footage shows house where Ghislaine Maxwell was arrestedLoaded:

Spealman claimed Burkman bragged to her that he was ‘really good friends’ with Barr and had persuaded him to fire Berman.

On June 19, Barr did release a statement saying Berman would step down – though Trump had reportedly been considering removing the prosecutor for two years.

Berman at first refused to resign, then later capitulated when his deputy was announced as the new acting US attorney for the Southern District of New York.

There is no evidence that Wohl or Burkman had any role in Berman’s firing.

There is also no evidence that Burkman and Barr have a close relationship.

‘The second part of their job was to discredit the [alleged] victims of Jeffrey Epstein and her,’ Spealman said.

‘I believed those girls, I felt like they were telling the truth and they were real victims.

‘I was disgusted with the things [Wohl and Burkman], were telling me. They were saying really bad things about them.

‘Like the one girl who said she got pregnant by Epstein and they made her get an abortion. Jacob said ”no, her boyfriend got her pregnant and then she demanded money.” It was just a lot of stuff that made them look bad.

‘That’s their job now, to discredit these victims. Hopefully so that the charges go away or [Maxwell] wins.’

Spealman claimed Wohl and Burkman revealed their plot with Maxwell during a night of partying at Burkman’s Arlington, Virginia home on July 11.

The part-time model said the two men had already spent months trying to get her involved in other smear campaigns. +15+15Ghislaine Maxwell has secret stash of Epstein’s sex tapesLoaded: Edge StyleFont Family

Spealman said Burkman first called her last September asking her to be a part of a purported reality TV show that he and Wohl were producing, which involved ‘playing innocent pranks on celebrities and politicians.’

After wining and dining the model at DC hotel bars and restaurants, as well as dangling the prospect of a $300,000 paycheck for her role, the two lobbyists revealed their real plans, she said.

‘At the third meeting they totally switched things,’ Spealman told DailyMail.com. ‘They said they wanted me to say I was selling Percocet to Nancy Pelosi. I was pretty shocked because that’s a big leap from what they had sold me on.

‘I don’t want to have that sort of reputation. I’m a paralegal. I was worried about defamation suits. I was like ”look guys, I can’t do that”.’

The model said the fake news peddlers agreed to change their plans. But at the next meeting in October, Spealman said they presented her with a statement to sign claiming she had ‘steamy sex’ with married senator Ted Cruz.

Spealman claimed Wohl and Burkman asked her to read the bogus statement at a press conference scheduled the next day.

‘I received a text directing me to a lavish fourth-floor suite,’ the statement said. ‘Inside was Senator Cruz, clad only in boxers. After a few old fashioneds, I was a willing participant in a night of steamy sex.

‘Despite his ugly face and overweight physique, I could not resist the opportunity to be with a United States Senator. I was paid $2,700 for the evening.

‘On November 30, 2019, I received an angry call from Heidi Cruz, the Senator’s banker wife. She told me that I would be exposed if I ever saw her husband again.

The statement continued: ‘Following sex, the Senator confessed to me that his wife ”could no longer give him an erection” due to her advancing age, flab and significant weight gain. He said that my young bikini body had made him feel like a man for the first time in years.’

The documents continued with more outlandish fake claims, saying Cruz used a ‘penis pump’ and took Spealman to a swingers party where his wife caught him and ‘literally dragged him by the penis to the front door’.

‘I would have never done it, I wouldn’t have felt comfortable doing it,’ Spealman told DailyMail.com.

‘But I kind of led them to believe I would do it… I felt manipulated a bit.

‘I took pictures of the script and told them I needed to rehearse and I’d get back to them.’

The paralegal said she showed the statement to her lawyers who called Wohl and Burkman and got her out of the sleazy deal.

‘After my lawyers talked to them Jack called me like 30 times,’ Spealman said. ‘I wasn’t answering, so he texted me stuff like “we need you to do this”, “this is your shot”, “you’re going to be a star”, stuff like that. I just sort of brushed them off.

‘After a few weeks they got another model to do the press conference instead.’

Journalists who attended wrote stories deriding the tricksters and dismissing the fake claims, and critics of the lobbyists turned up to disrupt the bizarre press conference by playing a banjo, sounding an air horn and throwing donuts at the two men.

Spealman said despite asking her to lie about high-ranking politicians, she remained friendly with the lobbyists and occasionally went out to DC clubs and bars with Wohl.

She said the men invited her to Burkman’s house on July 11 and made another indecent proposal before revealing their deal with Maxwell.

‘They wanted to ”smooth the waters”, is how they put it,’ the part-time model said. ‘They convinced me to come over Saturday just to talk. The first half they were nice.

‘As the night progressed, we were getting along. They felt comfortable asking me to do something like this again. I was a little surprised by it,’ she said.

‘I asked why they wanted me to do this and they said it was to have sex with politicians. The only name I remember was [Florida Republican Congressman] Matt Gaetz.’

Spealman shared with DailyMail.com notes she made of the conversation at the time.

‘I wrote down some quotes from Jack,’ she said. ‘He said he wanted ”Big-t****ed teens”, and ”very impressionable young women”. ”Jacuzzi parties” were mentioned by Jacob.+15

‘They went through my Instagram because all the models in my agency follow me and they picked out a few. Some of them are 16 and 17, though I didn’t tell them that. Jacob asked me to see if they would be interested.’

Wohl is currently facing trial over a felony charge for unlawful sale of securities, after a man committed suicide when he learned the 22-year-old former trader had lost his $75,000 in a failed investment scheme.

Mueller was serving as Special Counsel at the time, conducting an investigation into Russian meddling in the Trump 2016 campaign.

Wohl and Burkman held a botched press conference over the sexual misconduct claims in a shabby Holiday Inn, where the alleged victim failed to show up and Burkman gave a speech with his fly undone.

In another bungled smear this year, a woman accused Dr. Anthony Facui, the director of the National Institute of Allergy and Infectious Diseases, of sexually assaulting her in a hotel room in 2014 when she was 20, only to recant the story 10 days later confessing that Wohl and Burkman paid her to make it all up.

Their attempt to throw muck at Senator Kamala Harris didn’t stick either.

Sean Newaldass, 26, gave a press conference with the two lobbyists claiming he had an affair with Harris, but soon backtracked saying he was a paid actor and the only reason he made the claims was because the two lobbyists told him it was ‘performance art’ for a Spike TV show.

Sport is so good for your psyche

Why am I always so tired?